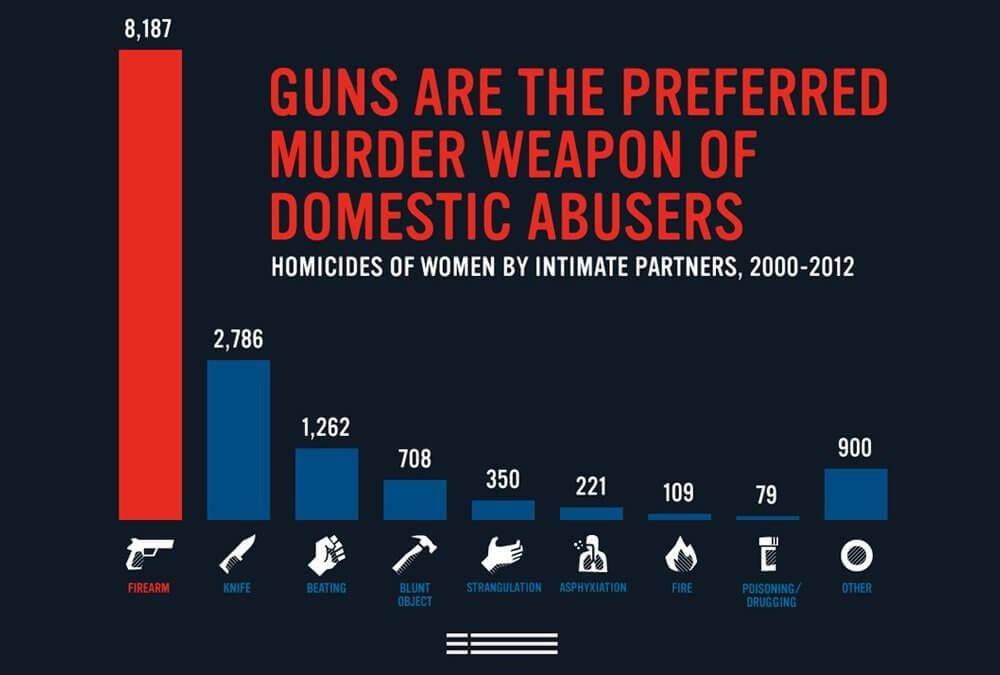 In the wake of the Parkland Florida shooting, thousands of young people nationwide stood up and made their voices heard on the issue of gun control. Although this has been met with much silence and resistance from the NRA, Republican leaders, and the Trump Administration, there are beacons of hope in this dark landscape. One such positive development is a new bill passed in New York State as part of Governor Cuomo’s 2018 Women’s Agenda (which contains initiatives pertaining to health, safety, and workplace issues that impact women) that would ban those convicted of domestic violence from buying or owning guns of any kind. Although previous legislation in the state mandated that domestic abusers turn over their handguns, no such mandate was made for other types of firearms. The new bill closes this loophole. Additionally, the bill expands the list of offenses that would make those convicted eligible for required gun surrender. The new list would include some— not all— assault and battery charges.[1] This is certainly a step forward towards common sense gun legislation that is so desperately needed in an America where gun violence taints the lives of every civilian in some way.

It is reasonable to think that laws like these, if implemented nationwide, could put a significant dent in the gun violence epidemic in the United States. First, it could potentially decrease the risk of women in abusive relationships dying from gun violence. According to the National Coalition Against Domestic Violence, the risk of homicide in domestic violence situations increases by 500 percent when guns are present in the home. Additionally, according to FBI and state crime data, a woman in the United States is shot and killed by her current or previous partner every sixteen hours.[2] These facts alone are already tragic. No woman should ever have to live in fear for her life because her abuser is able to freely obtain a lethal weapon. What makes this even more terrifying is the link between domestic violence and mass shootings. 54 percent of mass shootings that occurred between 2009 and 2016 were committed by individuals who had a history of domestic violence.[3]

The issue of gun violence and its links to domestic abuse are a perfect illustration of Hillary Clinton’s famous assertion that women’s rights are human rights. We cannot continue on as a society that values the lives and rights of half of the population less than the other half. It is not just morally wrong and blatantly unequal, it also leads to a poisoning of our society that negatively impacts everyone in it. The new legislation in this State is a step forward, certainly, but it also exposes just how much we have left to fight for in the pursuit of a world with true equality and without the plague of gun violence.

The website UltraViolet has exposed “the Ex” shooting target being sold on Amazon.Â  This comes on the heals ofÂ  Amazon selling t-shirts that advocated for rape and domestic violence.

The manufacturers of the “Ex”, Zombie Industries, are making a joke out of domestic violence.

“A shooting target mannequin named the “The Ex,” a large-breasted woman who bleeds when shot, is being sold on Amazon.com. It’s manufactured by Zombie Industries, a company that was featured at the NRA convention last weekend.

Let’s review the facts: 57% of mass shootings involve incidents of domestic violence. The presence of a gun in a domestic violence situation increases the chance that a woman will be murdered by 500%. 54% of women killed with guns are killed by intimate partners or family members. Gun violence against women is a serious problem.

The sole Amazon.com review says, “This was a very original, cool way to kick off a bachelor party for a firearm enthusiast, such as myself.”

We are proud to announce the formation of Women for Westchester (a.k.a. Women 4 Â Westchester.)
And we need you!

Women for WestchesterÂ (W4W) is an alliance of our countyâ€™s residents committed to advancing legislative bills, social policy, and actions that enable women to participate more fully and equally in society.

W4W’s first focus will be the Womenâ€™s Equality Agenda.

Women are discriminated against in almost every aspect of their lives and, sadly, these inequalities only increase throughout a womanâ€™s life. Did you know that women are twice as likely to live out old age in poverty than men?

Click Here to Read More Details about the Agenda

Join Women for Westchester as we move forward.

W4W will ask every elected official and candidate for office throughout Westchester to sign our petition in support of the Womenâ€™s Equality Agenda 10-point proposal. The principles are clear.

As Lt. Gov. Duffy said, â€œOver the years, New York has fallen behind on important womenâ€™s issues, and for this reason, it is essential for the Womenâ€™s Equality Act to become law this year. With the commitment and support of passionate advocates like all of you,â€â€¦ â€œour voices will be heard and we can make New York a fairer, more equal state for women in 2013.â€

W4W is looking for volunteers from throughout the County.

Please email us at: Catherine@WomenForWestchester
so that we can get organized!

Women for Westchester is affiliated with WCLA â€“ Choice Matters.