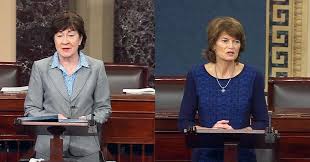 They MUST DEMAND an FBI investigation!

There MUST be a Full and Fair Hearing by the Senate Judiciary Committee – Starting with an investigation by the FBI.

THE FACTS:
Professor Christine Blasey Ford bravely came forward and identified herself as the survivor of a sexual assault by Brett Kavanaugh.

Dr. Ford courageously told the world how Trump’s Supreme Court nominee Brett Kavanaugh attacked her, pinning her down on a bed, while groping her and grinding his body against her, and trying to rip her clothes off. When she tried to scream out for help Kavanaugh covered mouth. One of Kavanaugh’s friend who was in the room turned up the music to cover her screams.

That Kavanugh friend, Mark Judge, refuses to testify before Congress. Although he denied the assault, his writings seem to say otherwise. In his book, “Wasted: Tales of a Gen X Drunk”, he describes extensive drinking and partying while attending Georgetown Preparatory School, with Kavanaugh. He even refers to a cohort as “Bart O’Kavanaugh”, a possible veiled reference to Brett Kavanaugh.

Now, a former schoolmate of Dr. Blasey Ford has confirmed hearing about the assault while at school.

The only thing that Dr. Blasey Ford is asking for is that the FBI investigate the assault, before she testifies before Congress – BUT Head of the Judiciary Committee, Senator Grassley, is refusing that request. Dr. Blasey Ford has even already taken and PASSED a polygraph test.

TAKE ACTION: TELL SENATORS COLLINS & MURKOWSKI TO DEMAND AN FBI INVESTIGATION BEFORE THE HEARINGS CAN PROCEED.